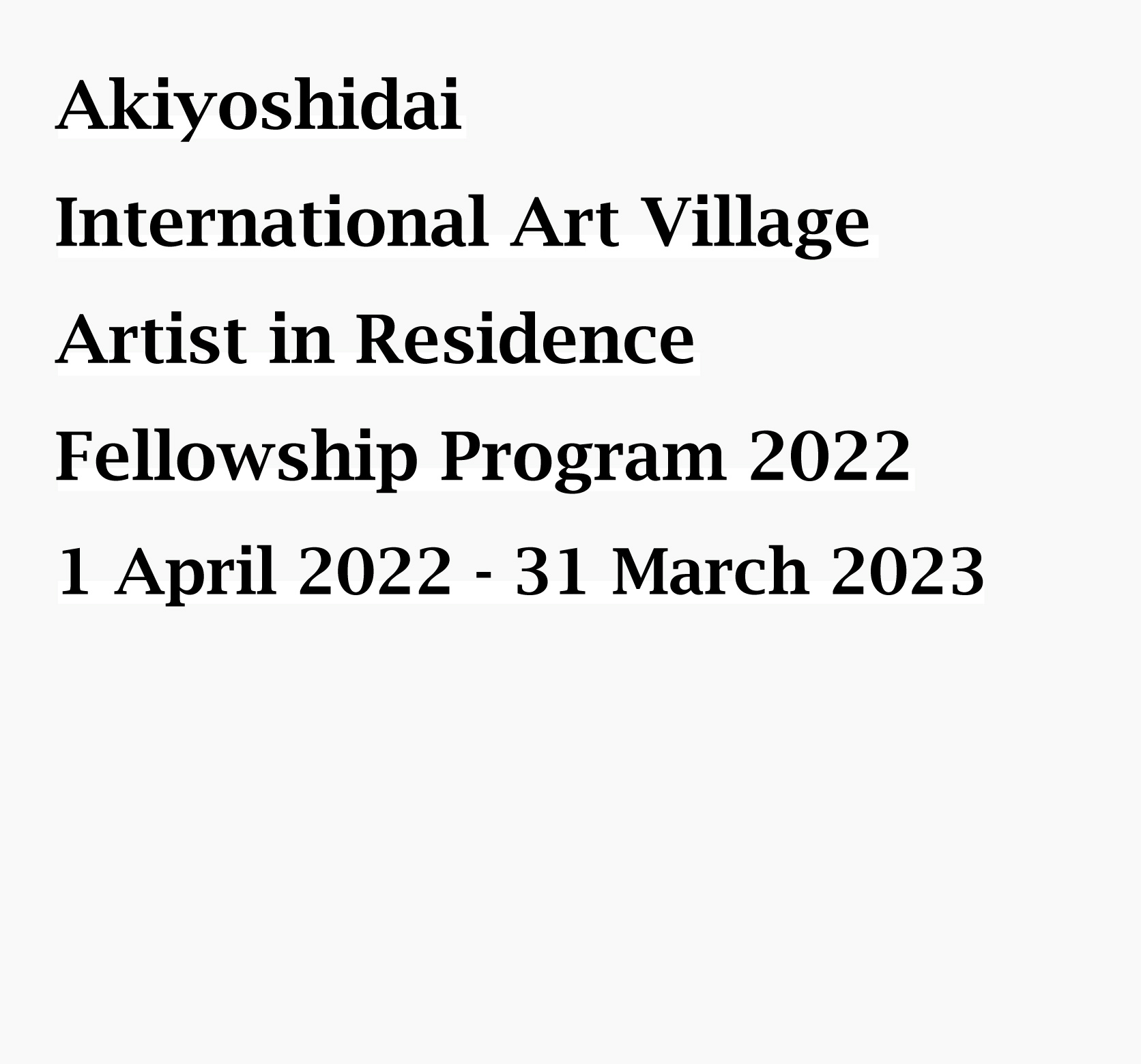 “The AIAV Fellowship” is open to domestic and international artists working in various creative fields. The aim of the program is to support artists’ activities and to offer the local people in Yamaguchi pref. opportunities to appreciate arts and communicate with artists crossing the borders of art disciplines and nationalities. During the residency period, artists should actively communicate with local people in Yamaguchi and participate in the exchange programs, including workshops, lectures, school visits and exhibitions.

Paul Hommage (*1988) and Yumi Takeuchi (*1991) are artists based in Japan and France, and started collaborative work in 2013. They often work with mixed media, using video projection devices as an overlay interacting with fixed representations. Their works appears as installations, including in their core drawings, etchings, paints, texts and so on. They tend to reveal the porosity between represented spaces and between mediums.
Their works investigate various notions such as palimpseste, overlay of representation and necessarily a part of randomness through the creation process.

Aga Skulicz (aka Pelikan Baba) is a visual interdisciplinary artist from Poland.
The core focus of her practice represents fields of illustration, tattoo art and animation. In her works, various traditional media are utilised and combined with digital technologies. She experiments with modern technologies to complement traditional techniques and extend their depth, through augmented reality, mainly connecting still and kinetic imagery.
Pelikan Baba’s work is influenced by mythology, urban art, graffiti, graphic novels, animation, linguistics and philosophy. The themes frequently explored are nature and dreams, animals, fantasy and reality, ephemerality. The development of her style is grounded in respect towards the Asian cultures and her Eastern European heritage.

My practice currently explores connections between ceramics and the environment. My work is inspired by irregularities and quirks in nature, which are stylized into sculptural objects which stand out but blend in with their environment.
Rather than creating permanent pieces, I am drawn to the ephemeral and transient, subjecting my pieces to interactions with the environment and audience. I enjoy the limited control over the final outcome, letting chance and the material itself lead part of the process.

George Stamatakis (painter) and Yukari Sakata (theater director) have collaborated in common fields many times since 2017. Their practices focus on the environment and pursue unique and exhaustive ways of expression while incorporating various historical imprints of culture and dialogues with nature as a political stand. The newest series of George Stamatakis’ paintings since 2021 takes inspiration from Japanese indigo. George and Yukari’s research aims to understand the philosophical morality and artistic heritage of Japanese indigo.

Courtney Swain is a multi-instrumentalist and songwriter/composer based in Providence, RI. After training as a classical pianist from a young age, Courtney graduated from Berklee College of Music in Boston as a vocalist with a degree in classical composition and music production. Tied together by her unmistakable voice, which the Wall Street Journal called “versatile, [and] ever-appealing”, Courtney’s artistic output reflects a broad range of influences and knows no boundaries.

My artwork is a process of transforming perception to reveal frailty, memory and allegory. My process involves repetitive activities of collecting, transforming and arranging. Through instinct and response, I relate to the sensual quality of materials, allowing tactility and pattern to inform my research and production. In my work, banal routines are given extraordinary attention. The rhythmic physicality in my process becomes a kind of ritual that infuses my work with a personal spirituality. Using an economy of means with humble materials, I explore how ordinary objects become animate and images bring the spectrum of time, metaphor and allegory into our daily lives.

Born in Taiwan. Her works often integrate the local environment, using sound, video, installation and live performances as creative tactics. She likes to mixture of forms and sound for developing themes in her performative works.

I enjoy working with my hands. Sometimes, I work on the floor surrounded by big sheets of material that take up more space than the spread out surface of my skin would. I use my body weight to press the material. Then I decompress and trace the marks and distress on the precarious floor landscape. The mountain creases turn into valley creases and vice versa, reminiscent of the sea breathing in and breathing out, time rising and falling. I work in different mediums. I borrow materials, techniques and strategies from different disciplines which I disengage from their original context and purpose. Nevertheless, materials have memory. Their ghosts are represented on the artwork. I wish to approach art-making from a spoken-word and story-telling angle. I think of materials as characters, the processes are the grammar that turn them into objects and concepts, the rhythm between forms and absences, light and darkness is the syntax. The title -which I consider an integral part of the work- is the punctuation mark. I am greatly concerned with the limitations of translation in-between different languages, peoples, cultures and disciplines and I investigate whether contemporary visual culture could compensate for the intellectual, ethical and experiential gap.