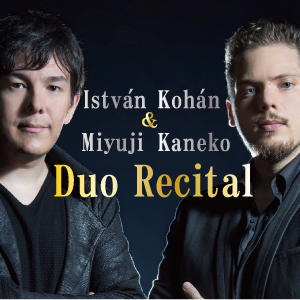 To celebrate the 150th Anniversary of Japan-Hungary Diplomatic Relations, we will hold the duo recital by the Hungarian Clarinet player István Kohán and the Japanese Pianist Miyuji Kaneko who studied in Hungary from the age of 6.
Based on Hungarian music, they perform the special program!

Brahms: Clarinet Sonata No.1
Brahms=Kohán: Hungarian Dance Suite
Bartok: Romanian Folk Dances
Monti: Csardas
*There is a possibility that musics and their order may be changed.

At the age of six, Miyuji Kaneko moved to Hungary and studied piano under Zsuzsa Cs. Nagy at the Bartók Elementary School of Music. In 2001, he entered The Special School for Exceptional Young Talents of the Franz Liszt Academy of Music and studied under Gabor Eckhardt, Gyongyi Kevehazi and Rita Wagner. After finishing all courses, he returned to Japan in 2006. He was admitted to Tokyo College of Music High School and studied under Kazune Shimizu, Akiyoshi Sako and Katsuko Miura. He has won numerous prizes at international music competitions, including Bartók World Competition in 2008. In 2012, he won The 22th Idemitsu Music Award. He performed with orchestras as the Hungarian National Philharmonic Orchestra, the Yomiuri Nippon Symphony Orchestra, the Japan Philharmonic Orchestra, the Tokyo Symphony Orchestra, the London Philharmonic Orchestra and the Astana Opera Orchestra. He also played with conductors Zoltan Kocsis, Ken-Ichiro Kobayashi, Jonathan Nott, Jun Maerkl, Sylvain Cambreling, Janos Kovacs, Alan Buribaev and John Axelrod. He has performed not only in Japan, but also in Hungary, the United States, France, Germany, Austria, Switzerland, Greece, Romania, the Czech Republic, Poland and China. He graduated at the top of his class from Tokyo College of Music and went on to finish graduate school there.

In 2016, his album “La Campanella” was released from Universal Music in July, and his solo recital titled “Miyuji Kaneko challenged Five Great Piano Sonatas!” was held in September. In August 2017, he served as a juror on the special screening committee for Bartók World Competition for Children and also a juror for the competition in Budapest in November.

He has been acting as the manager of NHK FM weekly radio program “Recital Nova” and introducing the young “nova” artists since April 2018. A Honorary Citizen of Kismaros (Hungary). A Steinway Artist.

If you have any questions, we accept by phone or email.
Please feel free to contact us(except on closed days).