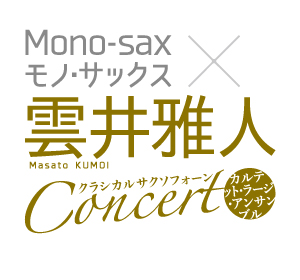 The world of French music by 10 Saxophones

Invite Masato Kumoi, who led the Japanese saxophone world, as a soloist, Mono-sax, the saxophone ensemble formed mainly by local musicians, will showcase the essence of French music, including Debussy's rhapsody.

The open class and lesson by a special guest, Mr.Masato Kumoi will be held a day before the concert.

After his graduation from Kunitachi College of Music, he went abroad to study in the graduate school of Northwestern University. He won prizes at the 51st Japan Music Competition and the 39th Geneva International Music Competition. In 1984 he had his first recital at Tokyo Metropolitan Hall. In 2017, he performed “Rapdodie” by Debussy with Jun Märkl and Kunitachi College of Music Orchestra. In 2018, he was invited to the North American Saxophone Alliance as Kumoi Quartet and had a performance and a masterclass. Joined in “Saito Kinen Festival in Matsumoto” in 2005 and 2014. In 2020, he performed “Ballade” by Tomasi with Masahiko Enkoji and Osaka Philharmonic Orchestra. He has released his Solo CDs such as “Simple Songs” (“Specially selected” by Record Geijutsu Magazine), “Tone Studies” (“Specially selected” by Record Geijutsu Magazine) and “Musique Française pour Saxophone Alto et Piano”. He leads the Masato Kumoi Saxophone Quartet. Currently he teaches at Kunitachi College of Music, Soai University and Nagoya University of The Arts.

Starting with giving a preview in 2012 with Saxophone Quartet by players who studied music at specialist courses, Mono-sax has concerts every year with various size of the Saxophone ensemble from solo to a large ensemble. They mainly deal with original works for Saxophone and arrangement works, and in particular, take up and sublimate saxophone works that are still considered to be minor.
One of their distinctive programs is “Mono-sax Baritone Club” that purposes to improve the Baritone Saxophone players’ skill, the ensemble formed by only Baritone Saxophones is often took up at their concerts.
They are having many concerts such as mainly independent concerts at Shimonoseki City Lifelong Learning Plaza DEARM SHIP, also “Classical Saxophone Concert” and “Otsukimi Concert” at AIAV and Gallery concert at Shimonoseki City Art Museum.
Player: Takayuki SASAKA, Sinji KOMORI, Kosei FUKUMITSU, Kan OHSHIMA, Takanori ISHIKAWA, Hironori UWABE, Kiyomi OHTSUKA, Kazunori HARADA, Miwako UWABE